Skip to content
The content of this chapter was adapted from the Concepts of Biology-1st Canadian Edition open textbook by Charles Molnar and Jane Gair (Chapter 11 – Homeostasis and Osmoregulation).

Osmoregulation is the process of maintaining salt and water balance (osmotic balance) across membranes within the body. The fluids inside and surrounding cells are composed of water, electrolytes, and nonelectrolytes. An electrolyte is a compound that dissociates into ions when dissolved in water. A nonelectrolyte, in contrast, does not dissociate into ions in water. The body’s fluids include blood plasma, the fluid that exists within cells, and the interstitial fluid that exists in the spaces between cells and tissues of the body. The membranes of the body (both the membranes around cells and the “membranes” made of cells lining body cavities) are semipermeable membranes. Semipermeable membranes are permeable to certain types of solutes and to water, but typically cell membranes are impermeable to solutes.

The body does not exist in isolation. There is a constant input of water and electrolytes into the system. Excess water, electrolytes, and wastes are transported to the kidneys and excreted, helping to maintain osmotic balance. Insufficient fluid intake results in fluid conservation by the kidneys. Biological systems constantly interact and exchange water and nutrients with the environment by way of consumption of food and water and through excretion in the form of sweat, urine, and feces. Without a mechanism to regulate osmotic pressure, or when a disease damages this mechanism, there is a tendency to accumulate toxic waste and water, which can have dire consequences.

The human excretory system functions to remove waste from the body through the skin as sweat, the lungs in the form of exhaled carbon dioxide, and through the urinary system in the form of urine. All three of these systems participate in osmoregulation and waste removal. Here we focus on the urinary system, which is comprised of the paired kidneys, the ureter, urinary bladder and urethra (Figure 4.1). The kidneys are a pair of bean-shaped structures that are located just below the liver in the body cavity. Each of the kidneys contains more than a million tiny units called nephrons that filter blood containing the metabolic wastes from cells. All the blood in the human body is filtered about 60 times a day by the kidneys. The nephrons remove wastes, concentrate them, and form urine that is collected in the bladder.

Blood enters each kidney from the aorta, the main artery supplying the body below the heart, through a renal artery. It is distributed in smaller vessels until it reaches each nephron in capillaries. Within the nephron, the blood comes in intimate contact with the waste-collecting tubules in a structure called the glomerulus. Water and many solutes present in the blood, including ions of sodium, calcium, magnesium, and others; as well as wastes and valuable substances such as amino acids, glucose, and vitamins, leave the blood and enter the tubule system of the nephron. As materials pass through the tubule much of the water, required ions, and useful compounds are reabsorbed back into the capillaries that surround the tubules leaving the wastes behind. Some of this reabsorption requires active transport and consumes ATP. Some wastes, including ions and some drugs remaining in the blood, diffuse out of the capillaries into the interstitial fluid and are taken up by the tubule cells. These wastes are then actively secreted into the tubules. The blood then collects in larger and larger vessels and leaves the kidney in the renal vein. The renal vein joins the inferior vena cava, the main vein that returns blood to the heart from the lower body. The amounts of water and ions reabsorbed into the circulatory system are carefully regulated and this is an important way the body regulates its water content and ion levels. The waste is collected in larger tubules and then leaves the kidney in the ureter, which leads to the bladder where urine, the combination of waste materials and water, is stored.

The bladder contains sensory nerves, stretch receptors that signal when it needs to be emptied. These signals create the urge to urinate, which can be voluntarily suppressed up to a limit. The conscious decision to urinate sets in play signals that open the sphincters, rings of smooth muscle that close off the opening, to the urethra that allows urine to flow out of the bladder and the body.

Osmosis is the diffusion of water across a membrane in response to osmotic pressure caused by an imbalance of molecules on either side of the membrane. Osmoregulation is the process of maintenance of salt and water balance (osmotic balance) across membranes within the body’s fluids, which are composed of water, plus electrolytes and non-electrolytes. An electrolyte is a solute that dissociates into ions when dissolved in water. A non-electrolyte, in contrast, doesn’t dissociate into ions during water dissolution. Both electrolytes and non-electrolytes contribute to the osmotic balance. The body’s fluids include blood plasma, the cytosol within cells, and interstitial fluid, the fluid that exists in the spaces between cells and tissues of the body. The membranes of the body (such as the pleural, serous, and cell membranes) are semi-permeable membranes. Semi-permeable membranes are permeable (or permissive) to certain types of solutes and water. Solutions on two sides of a semi-permeable membrane tend to equalize in solute concentration by movement of solutes and/or water across the membrane. As seen in Figure 4.2, a cell placed in water tends to swell due to gain of water from the hypotonic or “low salt” environment. A cell placed in a solution with higher salt concentration, on the other hand, tends to make the membrane shrivel up due to loss of water into the hypertonic or “high salt” environment. Isotonic cells have an equal concentration of solutes inside and outside the cell; this equalizes the osmotic pressure on either side of the cell membrane which is a semi-permeable membrane. 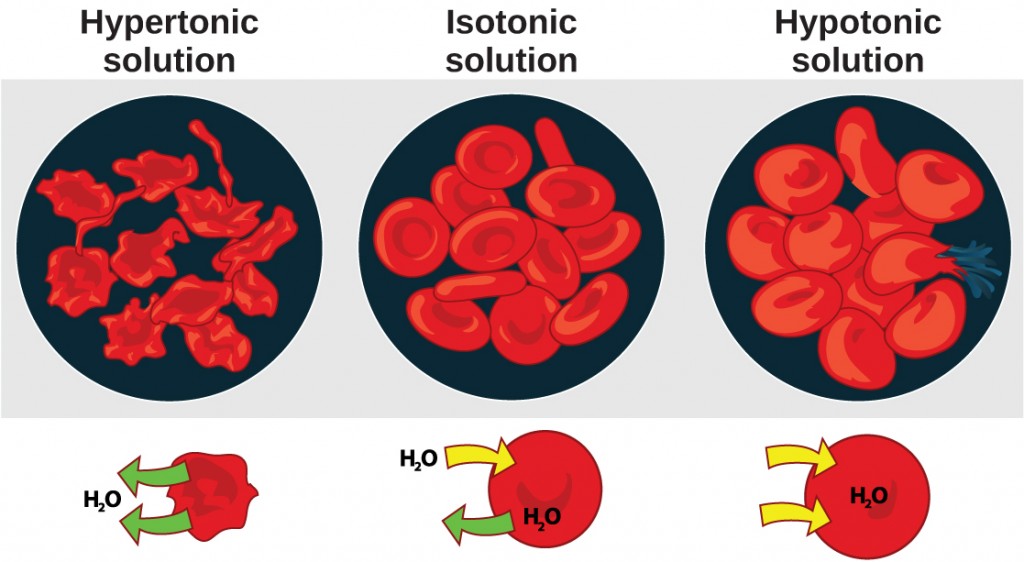 The body does not exist in isolation. There is a constant input of water and electrolytes into the system. While osmoregulation is achieved across membranes within the body, excess electrolytes and wastes are transported to the kidneys and excreted, helping to maintain osmotic balance.

Biological systems constantly interact and exchange water and nutrients with the environment by way of consumption of food and water and through excretion in the form of sweat, urine, and feces. Without a mechanism to regulate osmotic pressure, or when a disease damages this mechanism, there is a tendency to accumulate toxic waste and water, which can have dire consequences.

Osmotic pressure is influenced by the concentration of solutes in a solution. It is directly proportional to the number of solute atoms or molecules and not dependent on the size of the solute molecules. Because electrolytes dissociate into their component ions, they, in essence, add more solute particles into the solution and have a greater effect on osmotic pressure, per mass than compounds that do not dissociate in water, such as glucose.

Water can pass through membranes by passive diffusion. If electrolyte ions could passively diffuse across membranes, it would be impossible to maintain specific concentrations of ions in each fluid compartment, therefore, they require special mechanisms to cross the semi-permeable membranes in the body. This movement can be accomplished by facilitated diffusion and active transport. Facilitated diffusion requires protein-based channels for moving the solute. Active transport requires energy in the form of ATP conversion, carrier proteins, or pumps in order to move ions against the concentration gradient.

Persons lost at sea without any fresh water to drink, are at risk of severe dehydration because the human body cannot adapt to drinking seawater, which is hypertonic in comparison to body fluids. Organisms such as goldfish that can tolerate only a relatively narrow range of salinity are referred to as stenohaline. About 90 percent of all bony fish are restricted to either freshwater or seawater. They are incapable of osmotic regulation in the opposite environment. It is possible, however, for a few fishes like salmon to spend part of their life in freshwater and part in sea water. Organisms like the salmon and molly that can tolerate a relatively wide range of salinity are referred to as euryhaline organisms. This is possible because some fish have evolved osmoregulatory mechanisms to survive in all kinds of aquatic environments. When they live in fresh water, their bodies tend to take up water because the environment is relatively hypotonic, as illustrated in Figure 4.3a. In such hypotonic environments, these fish do not drink much water. Instead, they pass a lot of very dilute urine, and they achieve electrolyte balance by active transport of salts through the gills. When they move to a hypertonic marine environment, these fish start drinking sea water; they excrete the excess salts through their gills and their urine, as illustrated in Figure 4.3b. Most marine invertebrates, on the other hand, maybe isotonic with sea water (osmoconformers). Their body fluid concentrations conform to changes in seawater concentration. Cartilaginous fishes’ salt composition of the blood is similar to bony fishes; however, the blood of sharks contains the organic compounds urea and trimethylamine oxide (TMAO). This does not mean that their electrolyte composition is similar to that of seawater. They achieve isotonicity with the sea by storing large concentrations of urea. These animals that secrete urea are called ureotelic animals. TMAO stabilizes proteins in the presence of high urea levels, preventing the disruption of peptide bonds that would occur in other animals exposed to similar levels of urea. Sharks are cartilaginous fish with a rectal gland to secrete salt and assist in osmoregulation. 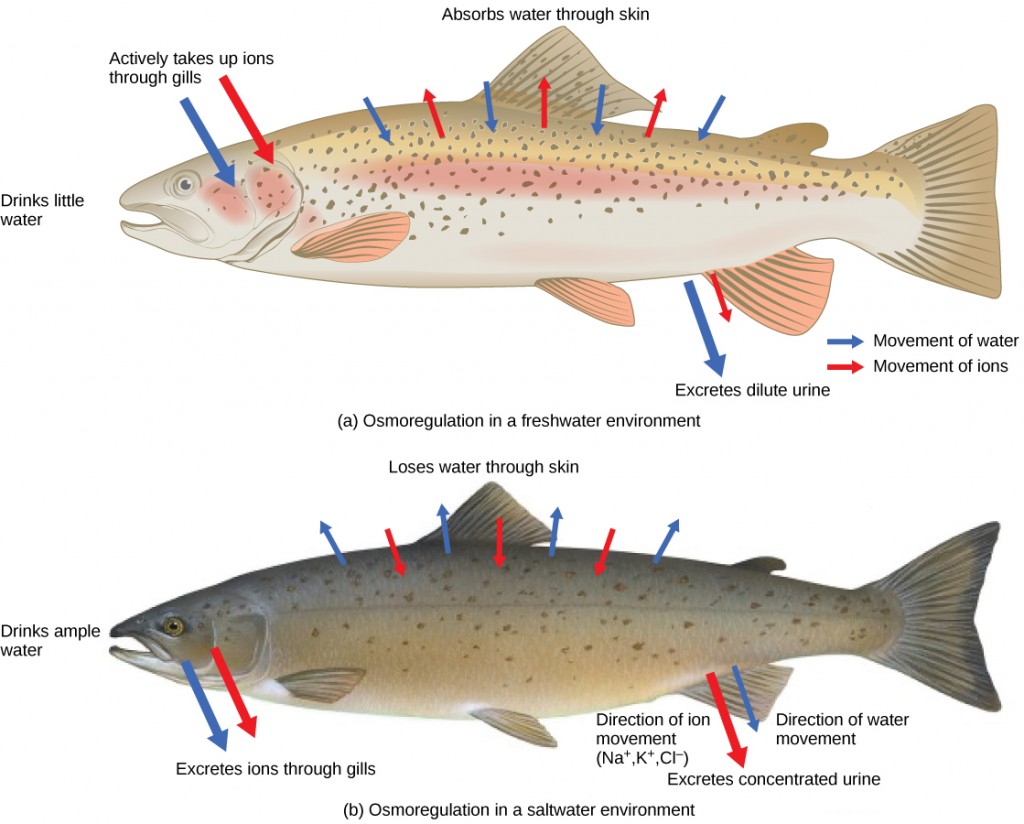 Figure 4.3.  Fish are osmoregulators, but must use different mechanisms to survive in (a) freshwater or (b) saltwater environments. (credit: modification of work by Duane Raver, NOAA)

Different osmoregulatory challenges and solutions in aquatic and terrestrial environments

Fish living in freshwater requirements have very different challenges in terms of ion and water balance in their body than the fish living in saltwater environments. Although structurally some solutions to these challenges are similar (chloride cells in gills and nephrons), the functional aspect of each solution is different. The next two figures (Figure 4.4 and Figure 4.5) offer a summary of these solutions and introduce challenges in solutions on land as well, which are discussed in further details in Chapter section 4.2. 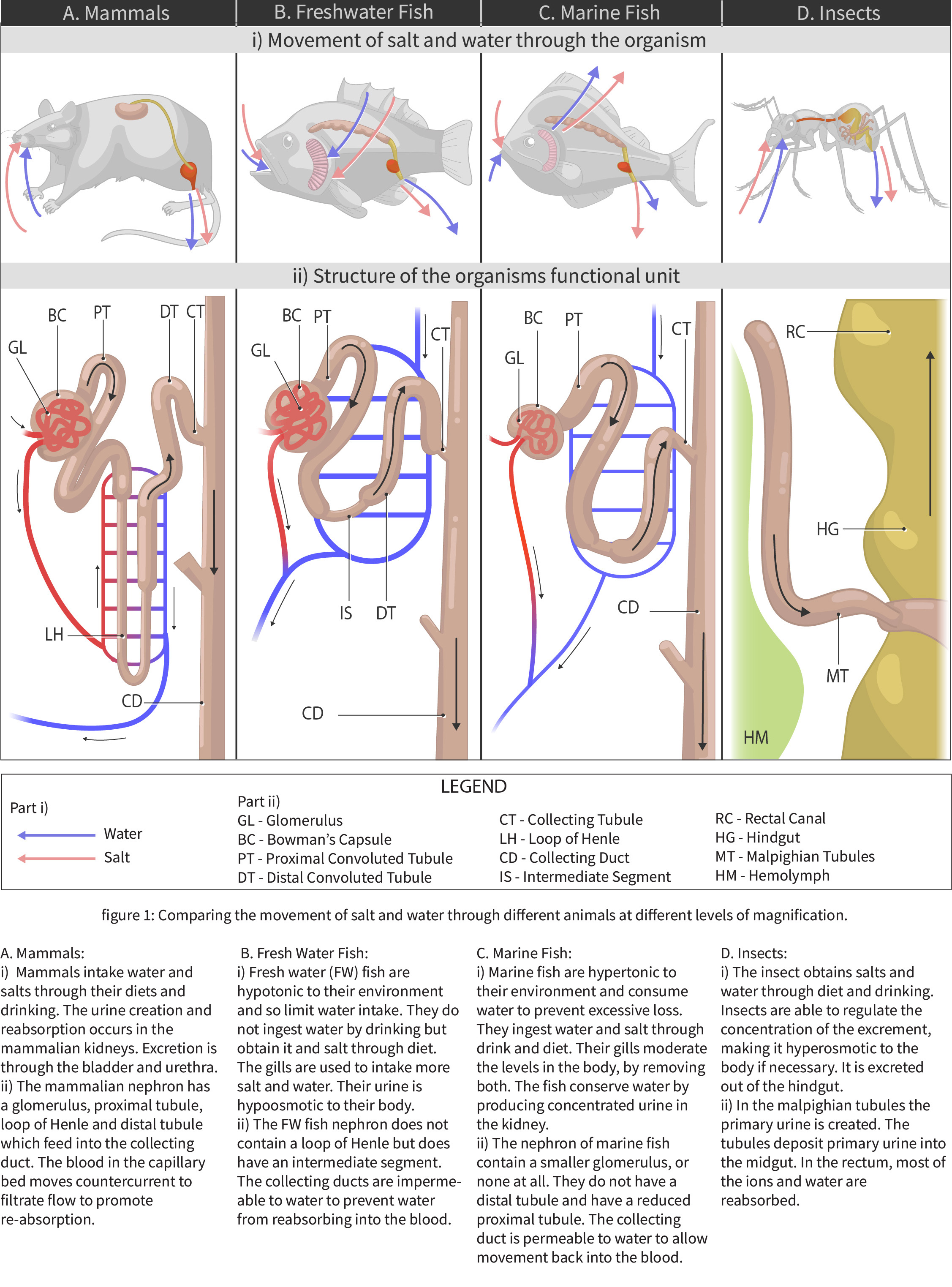 Figure 4.4. Comparison of movement of water and salt through different animals. Figure created and designed by Emily Taylor, a graduate student in Biomedical Communications Masters program at the University of Toronto Mississauga (developed as a project in MSC2001Y Visual Representation of Medical Knowledge course in the BMC MSc program). Please note that in B. freshwater fish should be referred to as hypertonic to their environment (or as in living in hypotonic environment). In C, the opposite should be the case. 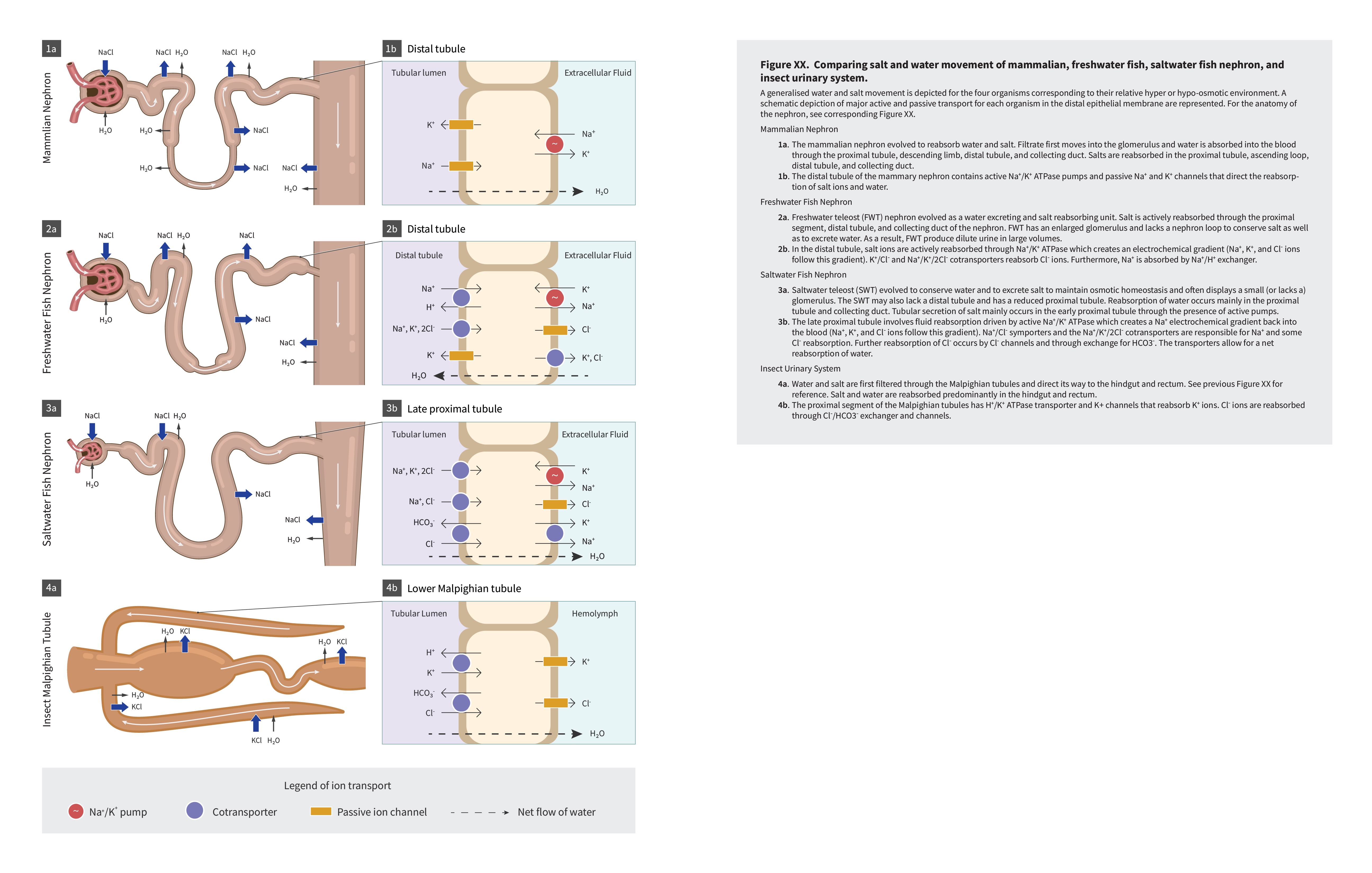 Figure 4.5. Comparison of nephron systems and channels in animals. This figure was created and designed by Su Min Suh, a graduate student in Biomedical Communications Masters program at the University of Toronto Mississauga (developed as a project in MSC2001Y Visual Representation of Medical Knowledge course in the BMC MSc program).

4.1 - Osmoregulation in Animals Living in Aquatic Environment by Sanja Hinic-Frlog is licensed under a Creative Commons Attribution 4.0 International License, except where otherwise noted.