The central nervous system (CNS) is made up of the brain, a part of which is shown in Figure 8.1 and spinal cord and is covered with three layers of protective coverings called meninges (from the Greek word for membrane). The outermost layer is the dura mater (Latin for “hard mother”). As the Latin suggests, the primary function of this thick layer is to protect the brain and spinal cord. The dura mater also contains vein-like structures that carry blood from the brain back to the heart. The middle layer is the web-like arachnoid mater. The last layer is the pia mater (Latin for “soft mother”), which directly contacts and covers the brain and spinal cord like plastic wrap. The space between the arachnoid and pia maters is filled with cerebrospinal fluid (CSF). CSF is produced by a tissue called choroid plexus in fluid-filled compartments in the CNS called ventricles. The brain floats in CSF, which acts as a cushion and shock absorber and makes the brain neutrally buoyant. CSF also functions to circulate chemical substances throughout the brain and into the spinal cord.

The entire brain contains only about 8.5 tablespoons of CSF, but CSF is constantly produced in the ventricles. This creates a problem when a ventricle is blocked—the CSF builds up and creates swelling and the brain is pushed against the skull. This swelling condition is called hydrocephalus (“water head”) and can cause seizures, cognitive problems, and even death if a shunt is not inserted to remove the fluid and pressure. 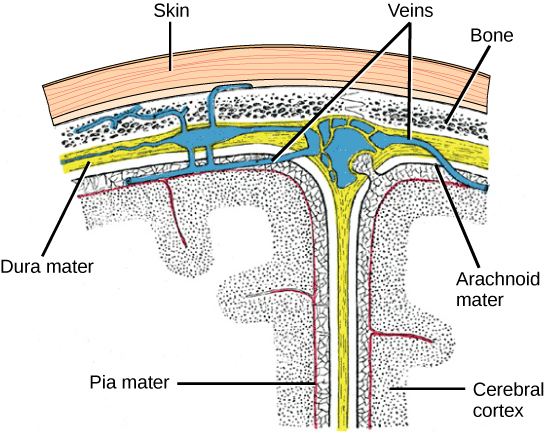 Figure 8.1.  The cerebral cortex is covered by three layers of meninges: the dura, arachnoid, and pia maters. (credit: modification of work by Gray’s Anatomy) 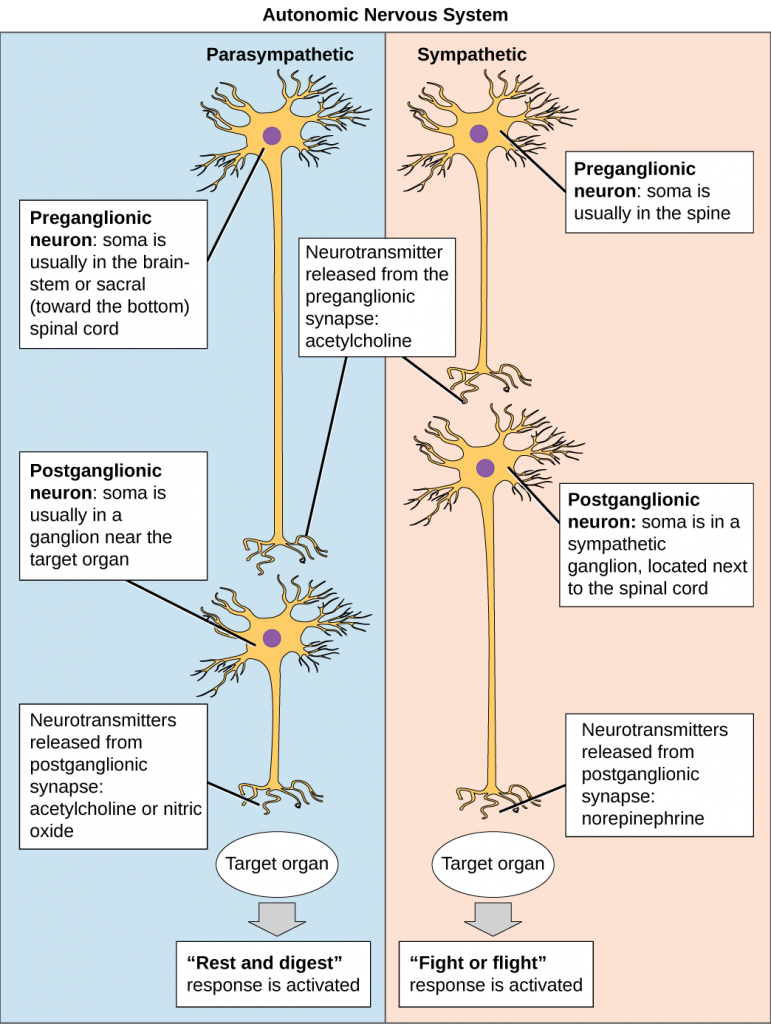 The sympathetic nervous system is responsible for the “fight or flight” response that occurs when an animal encounters a dangerous situation. One way to remember this is to think of the surprise a person feels when encountering a snake (“snake” and “sympathetic” both begin with “s”). Examples of functions controlled by the sympathetic nervous system include an accelerated heart rate and inhibited digestion. These functions help prepare an organism’s body for the physical strain required to escape a potentially dangerous situation or to fend off a predator. 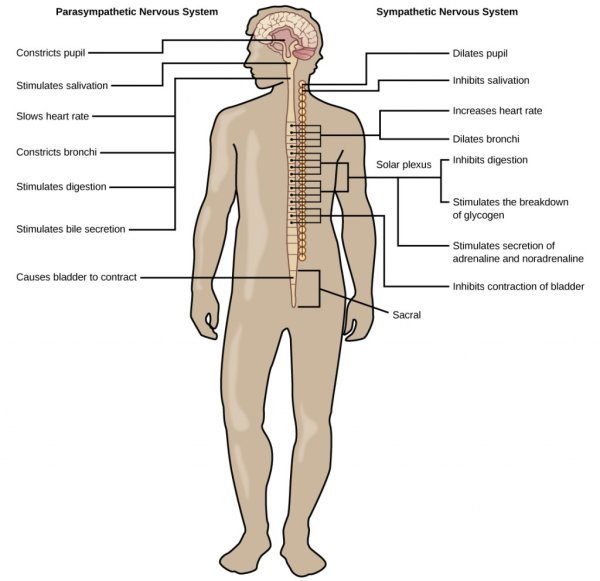 The sensory-somatic nervous system is made up of cranial and spinal nerves and contains both sensory and motor neurons. Sensory neurons transmit sensory information from the skin, skeletal muscle, and sensory organs to the CNS. Motor neurons transmit messages about the desired movement from the CNS to the muscles to make them contract. Without its sensory-somatic nervous system, an animal would be unable to process any information about its environment (what it sees, feels, hears, and so on) and could not control motor movements. Unlike the autonomic nervous system, which has two synapses between the CNS and the target organ, sensory and motor neurons have only one synapse—one ending of the neuron is at the organ and the other directly contacts a CNS neuron. Acetylcholine is the main neurotransmitter released at these synapses.

Spinal nerves transmit sensory and motor information between the spinal cord and the rest of the body. Each of the 31 spinal nerves (in humans) contains both sensory and motor axons. The sensory neuron cell bodies are grouped in structures called dorsal root ganglia and are shown in Figure 8.5. Each sensory neuron has one projection—with a sensory receptor ending in the skin, muscle, or sensory organs—and another that synapses with a neuron in the dorsal spinal cord. Motor neurons have cell bodies in the ventral gray matter of the spinal cord that project to muscle through the ventral root. These neurons are usually stimulated by interneurons within the spinal cord but are sometimes directly stimulated by sensory neurons. 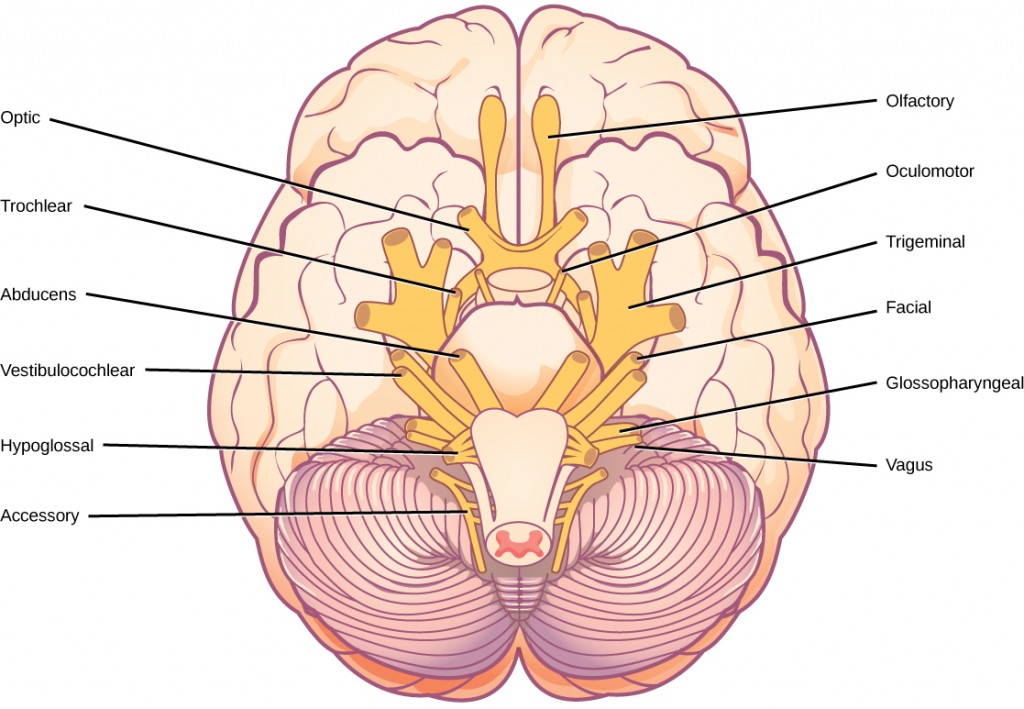 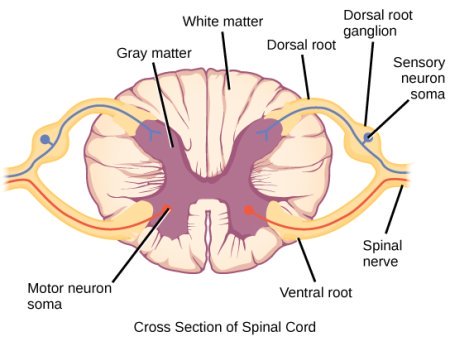 8.1 - Neuronal organization by Sanja Hinic-Frlog is licensed under a Creative Commons Attribution 4.0 International License, except where otherwise noted.